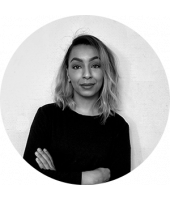 Born in 1990, Myriame El Jorfi explores oriental ornamentation as it is defined in contemporary society. She obtained a degree from a well renowned art school in Alsace, France - la Haute Ecole des Arts du Rhin. She liKhenifra in Morocco and Mulhouse in France.

To let lines find each other is to let instinct define form. There is no act more spontaneous than this that would allow me to express my idea of what ornamentation is. This aesthetics relies on my mixed origins which are central to my art. My approach is to reinterpret the original functions of traditional usages and signs from the point of view of contemporary design. Knowhow, materials, shapes, patterns - all this language is the result of the dual universe in which I reside and that I want to transcribe. Each line has a goal, a finality. I like to bring my idea for a motif to different territories but with the same driving force. It may be a drawing which tells a story, or become an ornamental object.